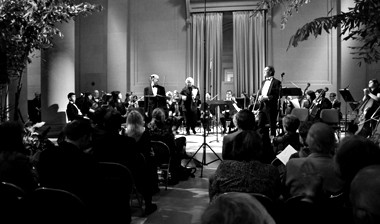 Maestro Sidlin conducted the Catholic University of America’s (CUA) Symphony Orchestra and Chamber Choir in an unforgettable performance of Rimsky-Korsakov’s one act opera Mozart and Salieri and Mozart’s Requiem at the National Gallery of Art on September 30 at 6:30 pm. Stephen Ackert, head of the music division at the Gallery gave opening remarks about Mozart’s time in Prague, while Grayson Wagstaff, dean of the Benjamin T. Rome School of Music at CUA offered his praise on the collaboration for such a wonderful event. Cultural Counselor Barbara Karpetová further recognized the event as a part of the Mutual Inspirations Festival. Angelic voices intertwined with the exceptional harmony of the orchestra in the moving concert with over 500 people in attendance in the majestic Gallery’s West Garden, as featured soloists Arianna Zukerman (soprano), Anamer Castrello (mezzo soprano), Issachah Savage (tenor), Matthew Smith (tenor), and Eugene Galvin (bass-baritone) beautifully rendered their performance. The evening concluded with the Requiem, the music of genius composer Wolfgang Amadeus Mozart, which brought a standing ovation.