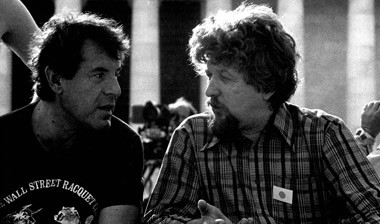 To learn more about the film business, Forman decided to cash in his savings and buy a 16 mm German camera, but did not know how to use it. His friend Ivan Passer introduced him to Miroslav Ondříček, an assistant cinematographer at Barrandov. This man would become Forman’s lifelong cameraman who shot many of his films, including Amadeus and The People vs. Larry Flynt. They established their cinematic relationship filming a “home movie” of a pop-music cabaret theater called the Semafor Theater. With that footage, Forman went to the Šebor-Bor production team, who would later oversee all Forman’s Czech films. They asked him to expand the film into a 15-minute short, and he came back with 45 minutes. The only way his film, which became known as Audition (Konkurs), could be distributed was with the addition of another short to make a feature-length show. Hence, Kdyby ty muziky nebyly (If There Were No Music), a film about brass bands, was added and packaged together. This was his first major step into the realm of directing.
Photo courtesy of Jaromír Komárek