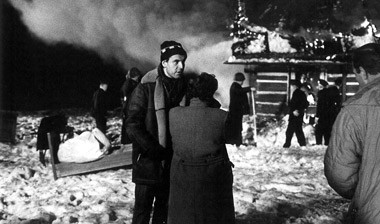 Forman developed a desire to be a director when he saw what directors would do with his scripts. His style was influenced by elements of cinéma vérité and his early films Black Peter (Černý Petr), Loves of a Blonde (Lásky jedné plavovlásky), and The Fireman’s Ball (Hoří, má panenko) made him a leader of the Czech New Wave, an artistic movement of the 1960s hailed as the “golden era” of Czechoslovakia’s cinematic history. Trademarks of the movement included long unscripted dialogue, dark and absurd humor, and the casting of nonprofessional actors. A frequent feature of the films was an interest in the concerns of ordinary people, particularly when faced with historical or political challenges. The core of the new wave was made up of recent graduates of the Film and Television Academy of the Performing Arts (FAMU) in Prague and defined by a relatively small group of directors who made their debuts in or around 1963, including Jiří Menzel whose film Closely Watched Trains (Ostře sledované vlaky) won an Academy Award for Best Foreign Picture and Věra Chytilová who is best known for her film Daisies.
Photo courtesy of Jaromír Komárek