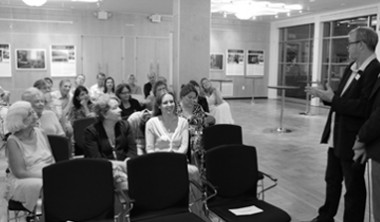 Documentary director Petr Jančárek took viewers inside his filmmaking “kitchen,” as he shared raw footage from his latest film project tentatively titled HavelMovie at the Embassy of the Czech Republic on October 4. The workshop atmosphere provided an intimate setting for a Q&A with the director. In 2009, former Czech President Václav Havel offered Jančárek the opportunity to document his life. During the last three years of Havel’s life, unique material was created that captured both public and private activities of a world-renown figure. The film is projected to have its premiere in November 2014, during the 25th anniversary of the Velvet Revolution (fall of communism). Through the film, Jančárek hopes to share a message not only about a great man and his fate, but also about the values which he represented and advocated, an example not only for Czechs but for people all over the world. During his U.S. visit, Jančárek also presented his documentaries Vaclav Havel, Prague Castle I. and II. at West End Cinema and the Avalon Theatre. The films serve as an exceptional record of an extraordinary man who went from being a dissident and prisoner to President of a free society.