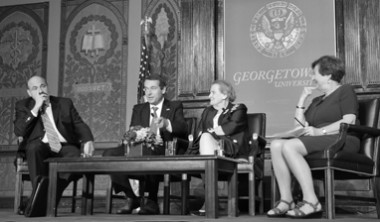 Georgetown University welcomed guests to Gaston Hall for a panel discussion celebrating the life and legacy of former President of the Czech Republic Václav Havel followed by the dedication of Václav Havel's Place in Alumni Square on October 2. Professor Tomáš Halík from Charles University gave a poignant address about Havel's message: "Truth and love must prevail over lies and hatred." In his speech he stated, "The battle for the highest values is always an unfinished revolution." The event included a short film presentation created by documentary director Petr Jančárek, which revealed a collage of moments from Havel's life. The Dalai Lama spoke about his close relationship and admiration for the former president in a video message stating "I am one of the admirers of that great person...Now we have the responsibility to carry his spirit." Panelists included former U.S. Secretary of State Madeleine Albright, Professor Tomáš Halík, and Šimon Pánek, executive director of the nongovernmental organization People in Need and former student leader of the Velvet Revolution. The panel was moderated by Professor Angela Stent, Director of the Center for Eurasian, Russian and East European Studies at Georgetown University. The panelists spoke about Havel's character and leadership, touching upon special moments in their life with him.