Home » Home Page » The Power of the Human Spirit 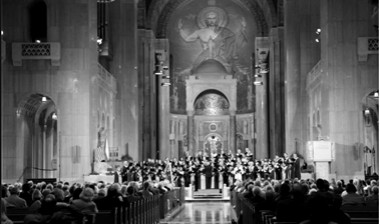 The Power of the Human Spirit

The U.S. Army Concert Band "Perishing's Own" conducted by Col. Thomas Palmatier and the Cathedral Choral Society under the direction of J. Reilly Lewis joined together for a magical night of music in the concert The Power of the Human Spirit dedicated to the late Czech President Václav Havel at the Basilica of the National Shrine on Sept. 30. The tribute opened with Janáček's Sinfonietta: Fanfare performed by the U.S. Army Herald Trumpets. The U.S. Army Concert Band's performance of movements from Husa's Music for Prague, composed after Prague Spring 1968, and Petr Eben's Prague Te Deum, created during the time of the Velvet Revolution, was powerful and moving. The staccato of the brass, the runs of the woodwinds, the precision of the percussion were all in perfect unison. Then, the doors of heaven opened as the Cathedral Choral Society rendered Dvořák's Sanctus and Benedictus. Of particular note was the performance of Otčenaš (Our Father), featuring tenor soloist Staff Sergeant Matthew Heil. The crescendos and decrescendos, beautiful harmony and tone created such a divine atmosphere. The program also included Janáček's Glagolitic Mass performed by the talented organist Todd Fickly with such mastery. Monsignor Walter Rossi, Ambassador Petr Gandalovič and Monsignor Tomáš Halík opened the beautiful dedication with over 700 people in attendance, including the former First Lady of the Czech Republic, Dagmar Havlová. The inspirational concert brought the power of the human spirit to the forefront - the emotion of music, the echoes of history, the power of friendship across borders.