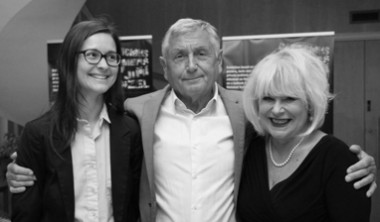 Three directors gave their insight into directing the plays of Václav Havel at the Czech Embassy on September 13, at 7 pm. Oscar-winning director Jiří Menzel spoke about his approach to working with actors, including Czech actor Pavel Landovský, known for his exceptional performance in Havel's play Audience. Physical theatre actress and diretor Miřenka Čechová showed clips of her upcoming performance Antiwords and spoke in detail about the choice of using female actors for parts traditionally performed by male actors and utilizing masks to present the piece inspired by Havel's Audience. Gail Humphries Mardirosian, a professor at American University, presented a short excerpt of Protest performed by actors from the Ambassador Theatre. In her rendition of Havel's play, two females are reflecting a mirror image of two male actors. Over 130 people attended the event and were treated to goulash from Capitol Prague and a brew of Pilsner Urquell. The evening was a reminder that Havel's plays continue to challenge, offer humor, and live on through unique interpretations by directors presenting modern-day versions of his compelling works.