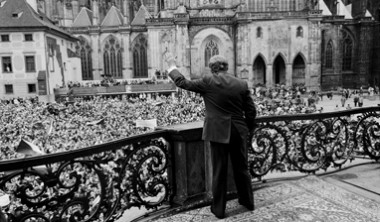 "You can't spend your whole life criticizing something and then, when you have the chance to do it better, refuse to go near it." ~Václav Havel

Havel never imagined himself becoming president. When thrust into the limelight following the Velvet Revolution, he felt a sense of responsibility that could not be ignored. Between 1989 and 2003, Václav Havel became the tenth and last President of Czechoslovakia and the first President of the Czech Republic. Shortly after his election, he gave a speech before the joint session of Congress, stating, “The salvation of this human world lies nowhere else than in the human heart, in the human power to reflect, in human meekness and in human responsibility.” A standing ovation greeted Havel at the conclusion of his speech. Havel received numerous state decorations, honorary doctorates, and international awards, including the U.S. Presidential Medal of Freedom.
Photo © Tomki Němec
Prague Castle,1990 - President Václav Havel welcomed by citizens.