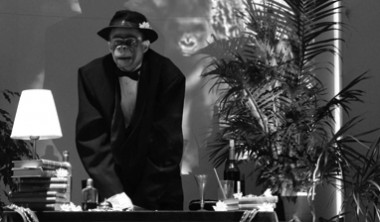 Actor Drew Valins presented a memorable performance as RotPeter in an adaptation of Kafka's A Report to an Academy, leaving the audience filled with laughter and thought at the Czech Embassy on Sept. 9. As guests entered the main hall, the music of Bach greeted them as well as a projection of images featuring apes in the wild above the main set of the performance. The "Impressario" opened the action inviting guest to flap their arms together and make a loud noise to welcome the star of the evening. After much pause, an ape in a tuxedo named Rotpeter emerged from a side door and made his way to the stage. Through Rotpeter, Drew cleverly presented his "report" to guests at the Czech Embassy of his journey from the wilds of the jungle to seemingly civilized humanity. His humor was full of wit, and he even took a slight "intermission" on stage to eat a banana with a fork and knife to show his cultured growth and share a bit of wine with a guest in the audience. After his "report," he agreed to take questions from the audience and the improvisation was hilarious. Rotpeter answered a variety of questions including, "What does he, as an ape, believe is the greatest gift that he can provide to humanity?" Kafka, through this story, took an outsider's perspective of the world to really examine the world around us and ask: "What is freedom?"