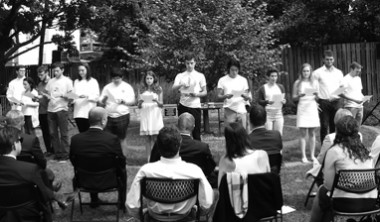 A beautiful, intimate ceremony with former First Lady of the Czech Republic Dagmar Havlová commemorated the 80th anniversary of the birth of Czech President Václav Havel at the Václav Havel’s Place at Alumni Square at Georgetown University on September 27 at 1 pm.  Speaker of the Chamber of Deputies of the Parliament of the Czech Republic Jan Hamáček and Ambassador of the Czech Republic Petr Gandalovič offered their remarks on Václav Havel’s legacy. Georgetown students in Theater & Performance Studies Program, led by Professor Natsu Onoda Power, performed the late President’s poem, This is How I Begin.  After being announced as the winner of the essay competition The Salvation of this Human World and receiving a trip to the Czech Republic, complements of the Embassy of the Czech Republic and CzechTourism, Georgetown student Melina Delkic read her winning essay, stating that “The only thing greater than receiving the gift of human compassion in a time of crisis is to give it to someone else.”   To conclude, Czech musician Jaroslav Hutka, performed Havlíčku, Havle, a song associated with the revolutionary atmosphere of 1989 in former Czechoslovakia and dedicated to his friend and former fellow dissident, President Václav Havel. The participants and guests then symbolically tied ribbons in the tri-colors of the Czech flag on the site’s linden tree to remember the Velvet Revolution.