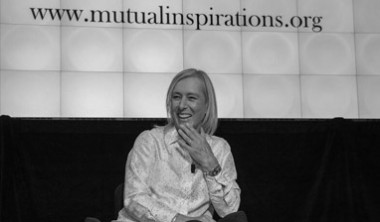 The Embassy of the Czech Republic, in collaboration with the Washington Post, held an exclusive sit-down talk with Czech-American tennis legend Martina Navrátilová and Washington Post columnist Petula Dvorak on September 12. Over 200 attendees gathered during their lunch period in an impressive space at the Washington Post to listen to Martina discuss her career, life, and beyond, even touching upon current issues in both tennis and politics.  Being recognized as an inspiration in her birth country as well as the United States, Martina noted that she strives to “stay true to herself,” despite her opinions preventing her from “getting onto the box of Wheaties.” Taking questions from the public as well, Martina didn’t shy away from speaking about prejudices facing women and the LGBT community.  She also touched upon her difficult decision at the early of age of 18 to leave the former communist Czechoslovakia to pursue her dream of playing tennis.  Still, she stressed that she “doesn’t put nationalism above being a human being.”
Photo courtesy of Lillis Werder