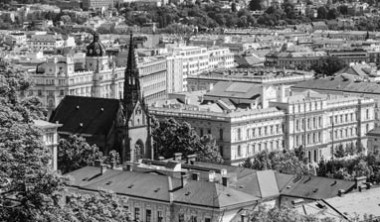 Comenius started school when he was sixteen in Přerov in Moravia and then continued his education in German schools, including the University of Heidelberg. A highly religious man, he became the head of the Brethren school in Přerov upon his return and was ordained minister of the Unity of the Brethren, which was a branch of the Czech Reformation movement and gradually developed into a Protestant denomination. Unfortunately, the fate of Europe took a dark turn in 1618 as the 30 Year War broke out when Bohemian Protestant nobility threw the Holy Roman Emperor’s representatives out of a window at Prague Castle. The war brought more violence, famine, and death. His wife of four years Magdalene and their two sons died of the plague in 1622. Heartbroken, Comenius devoted himself to writing, penning one of his masterpieces, The Labyrinth of the World and the Paradise of the Heart, which explores a spiritual journey to the true meaning of life.

Photo: This is a view of the city of Brno, Czech Republic, from Spilberk Castle, overlooking the John Amos Comenius Church, nicknamed the "Red Church" after the bricks used to build it.