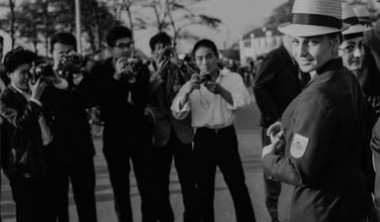 THE LOVE OF TOKYO

As medals racked up, Věra became more confident and more determined to do better. Learning how to cope with her nerves, she achieved her first Olympic medal in Rome (a silver team medal), but it was not until the 1964 Tokyo Olympic Games that she soared to stardom. Leading up to the Games, she bruised her spine, dislocated her fingers, had an inflamed Achilles tendon, and other ailments, but she would not interrupt her training. She had a stubbornness and determination to succeed. At the Tokyo Olympics, she battled for gold with her main competitor 30-year-old Soviet Larisa Latynina. Ultimately, Věra captured four Olympic medals, three gold (all around, vault, and balance beam) and a silver team medal. U.S. Olympic gymnast Muriel Grossfeld described her as a hard worker and a perfectionist. Nicknamed “The Love of Tokyo” and the “Darling of the Olympic Games,” she became so popular that she would dress incognito with a black wig when she would go out in public. Following her triumph at the Olympic Games, she won every women’s gymnastics event at the European Championships in 1965 and 1967. She also helped secure a team victory over the Soviets at the 1966 World Championships.

Věra Časlávská in her Olympic outfit for the Games in Tokyo, 1964.
Photo courtesy of the Czech Olympic Committee