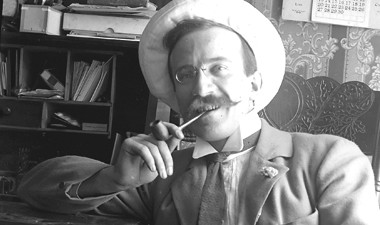 From September 9-30, 2011, the Embassy of the Czech Republic has on view Czech traveler Jaroslav Charfreitag’s photographs entitled Trip to the “New World” 1902–1903, which gives a glimpse of New York during the time of Antonín Dvořák, as well as Czech artist Jiří Grossman's exhibition From the New World.

Jaroslav Charfreitag’s Trip to the “New World” 1902–1903
Czech composer Antonín Dvořák was much inspired by America during his stay in the now demolished 1850’s row house on East 17th Street in New York City. While living in Manhattan, Dvořák composed the New World Symphony, the Biblical Songs, and the Cello Concerto, among other famous works. As Dvořák worked to capture the sound of America in his music, other Czechs traveling to the new world during Dvořák’s time were inspired by its sights as well. One such adventurer, Jaroslav Charfreitag, paid his way by washing dishes on a boat to America, arriving in 1902. He recorded his impressions of the life in that time in New York on film and writings sent back home. Although these memories were forgotten for some time, his grandson, Jaroslav Strnad, has shared them in the form of a photographic exhibition, “Trip to the New World: 1902-1903.”

Jiri Grossmann's From the New World
Czech artist Jiří Grossmann’s exhibition From the New World was inspired by Dvořák’s ingenious works: New World Symphony and Te Deum, which rose from Dvořák’s perception of America and his deep Christian faith. Influenced by these sounds, Grossmann’s creations reflect intimate experiences between the soul and the spiritual world and are a vivid record of scenery from the artist’s own life. Most blatantly, they demonstrate Grossmann’s pure artistic modesty and inner impulse, a contrast from the artist’s restoration work of famous masterpieces such as the The Overthrow of Titans by Václav Vavřinec Reiner (1717) located in the Czernin Palace, the seat of the Ministry of Foreign Affairs of the Czech Republic, and the mural of the presbytery in the Church of Judy and Simon in Lipov u Sluknova. During the exhibition, viewers can walk around the gallery and absorb the energy that Jiří Grossmann passes on through his paintings.