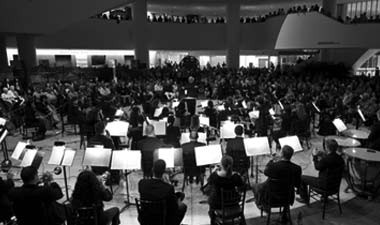 On September 17, 2011, The Catholic University of America Orchestra, under the direction of Maestro Sidlin, performed Dvořák's New World Symphony at the National Museum of American Indian to an audience of over 800 people.

Ambassador of the Czech Republic, Petr Gandalovič, and Grayson Wagstaff, Dean of the Benjamin T. Rome School of Music at The Catholic University of America (CUA) opened the event.

During the concert, Maestro Murry Sidlin spoke about Antonín Dvořák, his stay in America, and main inspirational sources for his Symphony No. 9.

A highlight of the event was CUA mezzo-soprano Kristin Green singing Goin’ Home from the second movement of the Symphony. On the second verse, the crowd joined her in singing the moving piece.
czech.cz
© 2011-2019 Embassy of the Czech Republic in Washington, DC
www.mzv.cz/washington
facebook
RSS