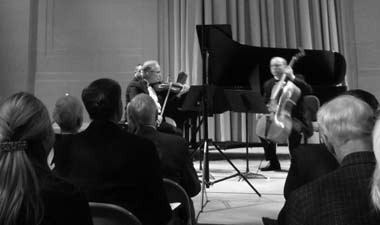 On September 18, 2011, the National Gallery of Art (NGA), presented the Rome Trio in a concert of Dvořák's acclaimed Piano Trio “Dumky” and other works. Over 400 people attended the concert in the West Garden of the Gallery, which launched NGA's 17th Annual Concert Season.

The concert, performed by the Rome Trio featuring Jody Gatwood (violin), Ivo Kaltchev (piano) and Michael Mermagen, professors at The Catholic University of America, introduced works by two famous Czech composers, Jiří Suk and Antonín Dvořák. The audience bravoed and applauded the trio at the end of their exceptional performance.

The concert was preceded by a lecture with Stephen Ackert (Head of the National Gallery of Art’s Music Department) on the subject of Art in America at the Time of Dvořák’s American Sojourn (1892–1895).
The concert itself was opened by Barbara Karpetová, Cultural Counselor of the Czech Embassy; Stephen Ackert; and Grayson Wagstaff, Dean of the Benjamin T. Rome School of Music at The Catholic University of America. All of the speakers mentioned the unique connection between art and music and the importance of the newly emerging mutual cooperation between the three organizations.
czech.cz
© 2011-2019 Embassy of the Czech Republic in Washington, DC
www.mzv.cz/washington
facebook
RSS