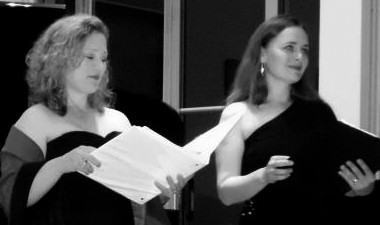 On September 15, 2011, the Embassy of the Czech Republic welcomed Washington Musica Viva (WMV) who performed an intimate concert of Dvořák and Martinů to an audiene of approximately 60 people. Classical WETA recorded the performance to air in the coming weeks. Click here to view photos from the event.

The concert was opened by a selection of Dvořák’s famous Moravian Duets, Op. 32, performed by soprano Elizabeth Kluegel, mezzo-soprano Karyn Friedman, who were accompanied on piano by Carl Banner. Their expressive performance drew a round of roaring applause from the audience.

After a short intermission followed the highlight of the evening, the First Piano Quartet by Bohuslav Martinů. Due to the intricacy of this piece, it is not often performed at concerts. However, the musicians were up to the challenge and really gave a moving performance, as viewed by the audience's praise and applause following the concert.