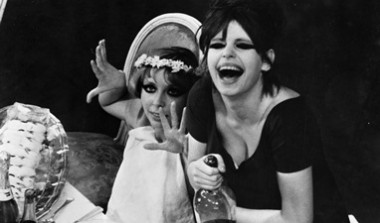 The National Gallery of Art and the AFI Silver Theater present three diverse programs on September 23, as part of the festival. Please be sure to scroll down to view all events, listed in order by date.

AFI SHOWCASE: The People vs. Larry Flynt
On September 23, at 11 am, the AFI Silver Theater and Cultural Center will screen the Oscar-nominated film The People vs. Larry Flynt. The film follows the life of pornographic magazine publisher and editor Larry Flynt (Woody Harrelson) and his subsequent clash with the law. The film spans Flynt's life, from his impoversihed upbringing in Kentucky to his court battle with Reverend Jerry Falwell, centering on freedom of expression. (DIR. Miloš Forman, 1996, 129 min., English)

With his first 16 mm camera, Forman made Audition, an account of tryouts for a musical play at Prague's famous Semafor Theatre, combining documentary and fiction. A satirical portrait of the young women who flock there merely to show off mediocre talents, the film's imaginative soundtrack is a mix of Czech pop, folk, and classical music.

In the aftermath of his exile, Forman's American debut was Taking Off, another tale that begins with a talent competition. Although it borrows motifs from Audition, the story takes a different turn, focusing on the American suburbanite parents of a runaway daughter who find themselves adrift in the "flower power" counterculture of the era, as they try to locate their girl. Chosen as the official American entry in the 1971 Festival de Cannes, the film—which includes a performance by Ike and Tina Turner—was awarded the jury prize.

About the Director:
Věra Chytilová is a Czech film director, best known for her 1966 film Sedmikrásky (Daisies).  She studied at the Film and TV School of the Academy of Performing Arts in Prague (FAMU) and was the only female of the Czech New Wave directors. Her film Daisies was banned by the communist government and she herself had a very hard time finding work after its release. The film, nevertheless, earned her international recognition and won the Grand Prix at the Bergamo Film Festival in Italy. Chytilová began making films again after courageously appealing in a letter to Czechoslovak President Gustav Husak. Her latest films include The Inheritance or Fuckoffguysgoodday and Flights and Falls.She was bestowed an award for Outstanding Artistic Contribution to the World at the 35th Karlovy Vary International Film Festival in 2000 and the Czech Lions Artistic Achievement Award in 2001.