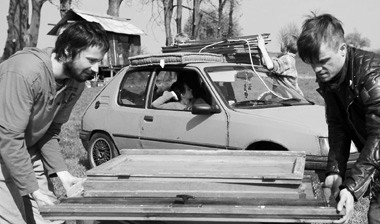 The Avalon Theater will feature director Bohdan Sláma’s Four Suns (Čtyři slunce) as part of its contemporary film series Lions of Czech Film on September 12, at 8 pm. In the film, Jára finds himself in a downwards spiral. He sees his teenage son repeating his own mistakes, while his wife’s patience wears thin. The film was selected to compete in the Sundance Film Festival. (DIR. Bohdan Sláma, 2012, 93 min., Czech with English subtitles)

About the Film:
Jára lives in a cramped apartment with his wife, Jana, their toddler, and Vena, his teenage son from a previous marriage. A man who has never actually grown up, Jára loses his job at a factory when he's caught smoking pot, and his wife's patience is wearing thin. Jára spends too much time with his friend, Karel, an oddball, New Age mystic. Jana, meanwhile, tries to connect with Vena, who has started drinking, skipping school, and hanging out with some disaffected punks. Nevertheless, Jára decides to go along on a road trip to find Karel's spiritual master. Check out the film trailer by going to www.theavalon.org.

About the Director:
Bohdan Sláma, born in 1967, has long been descibed as one of the most important up and coming directors in the Czech Republic. The filmmaker received early recognition and acclaim for his films Wild Bees (Divoké včely), Something Like Happiness (Štěstí), and The Country Teacher (Venkovský učitel). He is known for naturalistic dramas with elements of comedy, a trademark he upholds in his latest movie Four Suns (Čtyři slunce).

Tickets may be purchased at the box office or online at www.theavalon.org.