Home » Events » DOCS IN SALUTE: In the Shadow of Memory 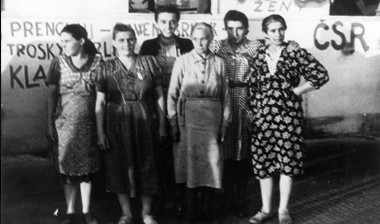 DOCS IN SALUTE: In the Shadow of Memory

The Library of Congress will present the documentary In the Shadow of Memory by director Jacky Comforty in the Pickford Theater on September 19, at 12 noon. In 1942, Nazis destroyed the innocent Czech village of Lidice, killing all the men of the town and sending the women and children to concentration camps to avenge the assassination of Reinhard Heydrich, a mastermind of Nazi genocide. Producer Jerri Zbiral explores the ongoing effects, the legacy of tragedy, and its relevance to today as she follows her mother and others who survived back to the site of the massacre. A Q&A with producer Jerri Zbiral follows the screening. (DIR. Jacky Comforty, 2007, 52 min., Czech and English with English subtitles)

About the Film:
The film is an exploration of the ongoing effects of tragedy on future generations. It is based on the life-story of Jerri Zbiral, whose mother and sister survived the Nazi destruction of the Czech village of Lidice during World War II. The stories had a profound impact on Jerri’s life. The village of Lidice was destroyed in 1942, in retaliation for the assassination of Reinhard Heydrich, a mastermind of Nazi genocide. All the men were murdered; all women were sent to Ravensbrück concentration camp; all but 9 of 91 children were gassed. After the war, the women who survived the concentration camp, including Jerri Zbiral's mother and half-sister, returned to Lidice. Filmed in the Czech Republic and Evanston, Illinois, In the Shadow of Memory consists of interviews with survivors, German visitors to the 50th anniversary memorial, and Jerri’s family, including her children.

About the Producer:
Jerri Zbiral (née Jaroslava Irena Zbíralová) was born in Prague. Her mother Anna and half-sister Eva were survivors of the Lidice tragedy in 1942. Jerri’s mother spent the last three years of WWII in Ravensbrueck concentration camp, while Jerri’s sister Eva was sent to live with an aunt in Germany as part of the Nazi Lebensborn program. Jerri’s mother walked back to Czechoslovakia after the war and was reunited with Jerri’s sister. Following the communist coup in 1948, the family left Czechoslovakia. In 1982, Jerri started to record the stories of her relatives and others who had survived the Lidice massacre. Ten years later, she and her husband Alan Teller, created the film In the Shadow of Memory about the tragedy and her own relationship to the event.

About Docs in Salute:
The new ongoing film series focuses on interesting personalities that have been touched by themes surrounding their Jewish heritage. The series salutes not only these extraordinary people, but also pays tribute to Forman's parents, who were killed in concentration camps. Share an afternoon uncovering courageous stories, triumph in the face of adversity, and memorable moments that changed the course of history. The series is presented in collaboration with the Packard Campus for Audio Visual Conservation at the Library of Congress, the Embassy of the Czech Republic, Washington Jewish Film Festival and the Hebrew Language Table.