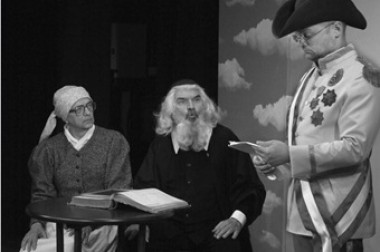 On October 16 at 6 pm, Bistro Bohem will present Czech Heaven (České nebe), a screening of a theater performance by Zdeněk Svěrák and Ladislav Smoljak. Czech Heaven is a theater performance full of specific humor from the repertoire of the Theater of Jára Cimrman, a Czech fictional genius, philosopher, playwright, poet, composer, teacher, traveler, inventor, detective, mathematician and sportsman.The film will be screened in the Czech language only (no English subtitles).

As most performances of the Theater of Jára Cimrman, Czech Heaven has two parts, the first includes a series of expert accounts about the life and works of Jára Cimrman and the second consists of a comprehensive presentation of some of his work. The performance describes a meeting of the Czech “heavenly” commission during WWI.  Saint Wenceslas, who heads the commission, has decided to enlarge it from three members (Saint Wenceslas, Jan Amos Comenius, Forefather Bohemus) to six, adding Karel Havlíček Borovský, Jan Hus and the Grandmother of Božena Němcová. The commission has to determine its stance towards Bedřich Smetana, Karel Sabina and Czech soldiers, which deserted the Austrian army and joined the Czechoslovak legion.