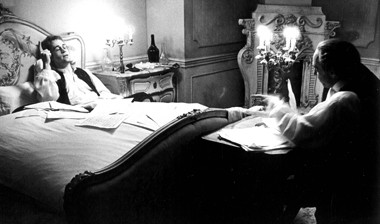 The Embassy of the Czech Republic will screen Making of Amadeus on September 27, at 6:30 pm. This riveting film takes a look behind the scenes at the trials and tribulations of shooting the Oscar-winning film Amadeus. At the center of the creative force is film genius Miloš Forman. After 20 years in exile, Forman returns to his homeland to film his masterpiece. With sets crawling with undercover police, Forman discovers that he must put his personal emotions aside in order for the film to succeed. A Q&A follows the screening with Cultural Counselor Barbara Karpetová. (DIR. Bill Jersey, 2002, 60 min., Czech and English with English subtitles)

Reservations are required.
For reservations, e-mail reservations@mutualinspirations.org
and put “Making of Amadeus” in the subject line.