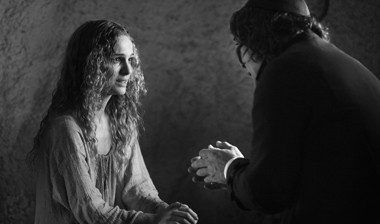 FILM CLUB: Timeless Stories - A Portrait of a Political Prisoner

On September 13, at 6:30 pm, the Embassy of the Czech Republic will launch its Film Club series with special guests Jana Svehlova and historian Tomáš Bouška in the program Timeless Stories - The Story of a Political Prisoner. Cultural Counselor Barbara Karpetová will open the event and reveal the "timeless stories" told through Miloš Forman's films such as Goya's Ghosts, followed by Jana Švehlová who will give context to the situation of the 1950s in Czechoslovakia. Bouška will then screen the film K. Ch. – The Documentary Portrait of a Female Political Prisoner. As Forman has examined the lives of individuals oppressed by regimes in films such as Goya’s Ghosts, Bouska’s documentary takes viewers inside the life of Karla Charvatova (K.Ch.) who was a political prisoner in Czechoslovakia in 1948 and presents her real life journey. A discussion with the special guests will follow the screening. (DIR. Tomáš Bouška, 2011, 42 min., Czech with English subtitles)

About the Film:
The film focuses on milestones in the life story of former Czechoslovak political prisoner Karla Charvátová. In November 1948, she became pregnant as a result of being raped while imprisoned due to anti-Communist, non-violent activities and thinking. Her newborn daughter was put up for adoption with Karla’s permission as her health as well as financial situation did not allow her to raise the baby. They meet again after 50 years of separation and share their memories.

Jana Švehlová received her Ph.D. from The Human Sciences Program at The George Washington University with area of concentration in political psychology. Her research has been on intergenerational psychological effects on daughters of political prisoners in former communist Czechoslovakia (now Czech Republic and Slovakia). She has presented her research at various scientific meetings in the United States, Canada and in Europe. She left Czechoslovakia in 1966 and arrived in the United States via Austria and Great Britain in 1974. Although retired from the US Government, she has an appointment as Adjunct Assistant Professor at the Uniformed Services University of the Health Sciences.

Tomáš Bouška received his Ph.D. in oral history at the Charles University in Prague. He works at the Aspen Institute Prague and lectures at the College of Media and Journalism. He is a board member of the Czech Oral History Association. His main field of interest is oral histories of political prisoners, and he is founder and chairperson of the volunteer research organization Political Prisoners.eu / Političtí vězni.cz. He directed a documentary portrait of a female political prisoner called K.Ch. (2011, 40min) and published an oral history collection of former Czechoslovak political prisoners in 2009.

Political Prisoners.eu is a Prague-based, cross-disciplinary, unsubsidized research project whose primary purpose is to collect, analyze and disseminate the life stories of the political prisoners who survived jailing in Stalinist prisons and working camps in the former Czechoslovakia and other countries.

Most of our narrators were jailed in the 1950s and 1960s but our work never finishes when they close this chapter. This traumatic experience continued after they were released from prison and their families are also part of it. We think their life stories can enrich our view of the Czechoslovak socialist dictatorship by the new perspectives.

The project team is based on volunteer work of students (mostly Ph.D. candidates) from various universities and science fields including history, psychology and social anthropology. They hold historical conferences, youth workshops, and compile the Czechoslovak Political Prisoners anthology to enable these stories to cross the globe. They use the website www.politicalprisoners.eu to share the authorized transcripts of interviews and multimedia with the public. Their off-line archive is also available at the Oral History Center in Prague. They have collected about 35 life stories until this year and recently revised all life stories published on their website in English. Another recent activity was their discussion panel "The Destinies of Women Political Prisoners in the Light of (Un)Rule of Law“ organized at the 15th International Conference of Forum 2000 Foundation. They opened the topic of Austrian women abducted to the Soviet Gulag after WWII at the conference.

Admission is free. | Reservations are required.
For reservations, e-mail: reservations@mutualinspirations.org and put “Bouska” in the subject line.