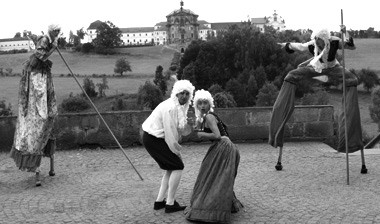 On October 20, at 11 am and 3 pm, the Embassy of the Czech Republic welcomes the Czech theater group Geisslers Hofcomoedianten who will perform the Stilts Trilogy – a street theater performance comprised of three parts: The Astronomical Clock, The Player, and The Bird Catcher. Actors incorporate music and witty banter as they uncover stories from the baroque Kuks Castle. The event will also include an exhibition on Kuks Castle in the Czech Republic. The performance, dedicated to Milos Forman childhood, is a part of the Kids Euro Festival 2012. Admission is free. Please note, the performances will be outside. Please dress accordingly.

The theatre company Geisslers Hofcomoedianten was founded in 2002, reinventing the tradition of the baroque theatre at the Kuks Castle. The company’s repertoire consists of original baroque texts with connections to the Kuks Castle, combined with company’s own poetic style. The theatre has participated in theatre festivals and competitions in the Czech Republic, Austria, Hungary, Italy and Poland. Enjoy a performance of this comedic theater company at the Embassy of the Czech Republic on October 20 (two shows - 11 am and 3 pm) as part of the Kids Euro Festival.

Three short street-theatre performances on stilts represents the different cultures of European Baroque – German, Italian, and French, which met in the Czech lands.

The Astronomical Clock explores the Baroque clock which used to stand in Prague and was then transported to the spa Kuks in eastern Bohemia. In the performance, the actors cleverly “rebuild the clock” on their stilts, becoming mechanical arms of the clock and performing ten short sketches that recall 10 biblical stories, which were scenes featured on the astronomical clock – the Christian clock.

The Player brings up the eternal fight between two partners – man and woman. Their behavior returns in cycles like the movement of revived figures of the astronomical clock. The actors incorporate a saxophone and drum in the short performance.

The Bird Catcher reveals a story about the traps and dangers of love, as a young shepherd becomes entranced by a beautiful nymph. This story draws on a poem La Belle Uccellatrice (A Beautiful Bird Catcher) by French poet Gilles Menage, which tells the story of a great singing nymph who attracts birds with her lyrical voice. Once a young shepherd gets caught in her net while grazing sheep on a nearby meadow…

The theatre company Geisslers Hofcomoedianten was founded in 2002 with the goal of reviving the Baroque theatre tradition made famous in the town of Kuks, Czech Republic. Its first performance was Amor Tyran presented at the end of August 2002 during the first year of the festival Theatrum Kuks. The company chose the new theatre Comoedien-Haus in Kuks as its home stage. Geisslers Hofcomoedianten has worked to revive the famous Baroque era with its repertory focused on original Baroque texts, geographically related to Kuks. However, they stage their performances using their own theatre poetics and present them as new premieres. Since 2002, Geisslers Hofcomoedianten has participated in theatre festivals and competitions around the Czech Republic gaining a number of awards. The company also performed successfully at theatre festivals in Austria, Hungary (Special Jury Award at the International Theatre Festival in Kazinbarcica, 2008), Italy (2009), and Poland (2010).

Since 2009/2010, after most of its members graduated from the Theatre Department of the Academy of Arts in Prague, Geisslers Hofcomoedianten has begun to regularly stage performances during the theatre season in Prague. The company faithfully attempts to follow its specific orientation toward the Baroque period and apply what they call a "Baroque vision of the World."

Admission is free.
RSVP to reservations@mutualinspirations.org and put "Geisslers" in the subject line.