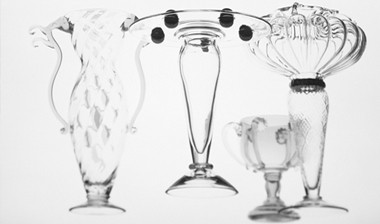 Renowned Czech artist Bořek Šípek will open his first U.S. solo exhibition Bořek Šípek: Baroque Soiree, featuring exquisite glass designs at Industry Gallery in Washington, DC, on September 8, from 6-9 pm. The exhibition will include the premiere of his new 2012 Vase Collection and a dazzling new chandelier, crafted entirely from lead-free Bohemian glass, in the neo-Baroque style for which he has become world-famous. Director Miloš Forman is a friend of Šípek and avid collector of his impressive glass pieces. As Forman’s Oscar-winning film Amadeus utilized the historic dressings of Mozart’s era to clothe and distinguish a regal space, so does Šípek incorporate opulent designs to transform a stark space into a majestic realm.

About the Artist:
World-class artist, designer, and architect Bořek Šípek was born in Prague in 1949. Šípek studied furniture design at the School for Arts and Crafts in Prague, architecture at the University of Applied Arts in Hamburg, and philosophy at the Technical University in Stuttgart. He obtained his Doctorate in architecture at the Technical University of Delft in 1979. From 1990-1998, he was Professor of Architecture at the Prague Academy of Applied Arts, and, in 1998, was appointed as Court Architect in Prague by President Václav Havel. Šípek's architectural works have been collected by famous personalities such as director Miloš Forman, and have garnered several major awards; he has also created designs for numerous influential design firms, including Cleto Munari, Dior, Driade, Sawaya & Moroni, Vitra, Manufactures Nationales de Sèvres, Swarovski, and Anthologie Quartett.

Admission is free. | Reservations are not required.

The exhibition will be on view until October 13.