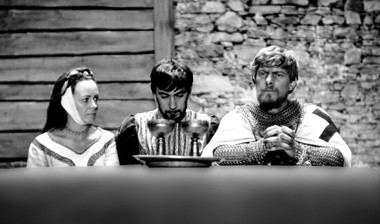 Director František Vláčil remains one of the most prominent filmmakers of all time in the Czech Republic. Explore his film Valley of the Bees (Údolí včel) at the National Gallery of Art in the East Building Auditorium on October 13 at 2 pm.

About the Film:
From another novel by Vančura, The Valley of the Bees tells the odyssey of Ondřej, exiled as a child to a strict order of religious knights—his punishment after attempting to sabotage his father’s wedding. When Ondřej reaches maturity, he returns to his native village to seek retribution, even as his monk-guardian tries to bait him back to the order. In bold black-and-white Cinemascope, “Vláčil's spectacular orchestration of landscape, violent chaos, wild animals, and medieval iconography is never less than impressive”—Michael Atkinson.  (Údolí včel, 1968, 35 mm, Czech with subtitles, 97 minutes)

About František Vláčil:
Born in Český Těšín, Silesia, on February 19, 1924 and died in Prague, on January 27, 1999. He studied at the Prague Academy of Arts, Architecture and Design, with the ambition to pursue a career as an artist, but he soon switched to studies of Art History and Aesthetics in Brno. From the early stages of his university studies, he focused primarily on the cinematic medium, distinct traces of his initial choice remained continuously present in his characteristic emphasis on the artistic attributes of visual representation. Vláčil’s dominant 1960s achievement was the trilogy of historical dramas, marking the key stage of his artistic development. The films, Ďáblova past (The Devil's Trap, 1961), Marketa Lazarová (1967), and Údolí včel (The Valley of the Bees, 1967), each telling its own balladic story of a solitary individual grappling with fate's trials and tribulations and with incomprehension on the part of their contemporaries, together represent a highlight in the history of Czech filmmaking. As the director stated, “What I was concerned with in Markéta Lazarová was primarily one thing: namely, to make a statement about people living some six or seven centuries ago as though they were our contemporaries.”

Program Note:
František Vláčil’s (1924-1999) historical pageants summon a far-off time and place in a naturalistic style that suited his training in aesthetics and art history. His relatively small body of work stands out from the gritty Czech New Wave films of the era and, not surprisingly, was seen as subversive by censors in his native Czech Republic. Thwarted after the 1968 Soviet invasion, Vláčil maintained that he was only interested in “pure film” and applying poetic license to shape allegory from ancient tales. His work suggests parallels to other metaphorically rich work of the last century including films by Tarkovsky, Bergman, and Eisenstein.