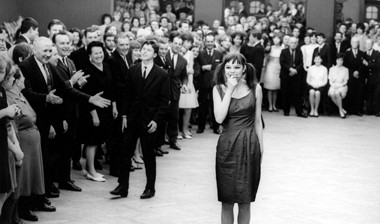 On September 22, at 4 pm, the National Gallery of Art will explore the legendary filmmakers of the Czech New Wave with Director of the National Film Archive in Prague, Michal Bregant.

About the Czech New Wave:
The Czech New Wave was an artistic movement of the 1960s, hailed as the “golden era” in Czechoslovakia's cinematic history boasting some of the most attractive films produced in Europe. Join the director of the National Film Archive in Prague, Michal Bregant, as he explores legendary filmmakers of the Czech New Wave at the National Gallery of Art in the East Building Auditorium on September 22 at 4 pm.

The core of the New Wave was comprised of recent graduates of the Film and Television Academy of Performing Arts (FAMU) in Prague, who made their debuts in or around 1963 and continued to produce internationally acclaimed work throughout most of the decade. Prominent Czech directors include Miloš Forman, who directed Black Peter (Černý Petr, 1963), Loves of a Blonde (Lásky jedné plavovlásky, 1965) and The Firemen's Ball (Hoří, má panenko, 1967); Věra Chytilová who is best known for her film Daisies; and Jiří Menzel, whose film Closely Watched Trains (Ostře sledované vlaky, 1966) won an academy award for best foreign language film.

About Masters of Cinema:
This series of films at the National Gallery of Art features the works of Czech cinematic geniuses, from Gustav Machatý, a legend of the silent film era; to František Vláčil, a director who had an incredible flair for epic films; and Miloš Forman, leader of the Czech New Wave as well as acclaimed Hollywood director. The film screenings take place at the National Gallery’s East Building Auditorium.