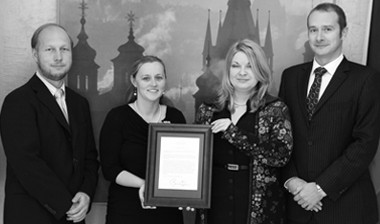 The Mutual Inspirations Festival 2012 - Miloš Forman has drawn to a close, but the achievements of the festival continue to resonate throughout Washington and beyond. The festival celebrated the Czech-American mutual cultural influences and, particularly, the work of the renowned Oscar-decorated director and great Czech-US personality, Miloš Forman. In the picture above, Cultural Attaché Robert Rehak, Public Relations Specialist Mary Fetzko, Cultural Counselor Barbara Karpetová, and Deputy Chief of Mission Jaroslav Zajíček hold a letter from the President of the United States expressing his congratulations for the festival.

Over fifty screenings, lectures, concerts, and exhibitions exploring the director’s take on certain themes effecting society as well as the best of Czech cinematography welcomed over seven thousand guests just in the DC area. The US-Wide Retrospective: A Tribute to Miloš Forman brought Forman’s work to three thousand more in fifteen cities from coast to coast.

One of the festival’s main threads was Masters of Cinema film series, featuring the works of Czech cinematic geniuses and enjoyed by over three thousand people at the prestigious National Gallery of Art. Another favorite film series was Docs in Salute, which concentrated on documentaries of Jewish themes and screened over the course of two months at the Library of Congress. The American Film Institute’s Silver Theater and Cultural Center offered an AFI Showcase of Forman’s films and Czech New Wave features. In the meantime, movie goers also delighted in contemporary Czech cinema at the Avalon Theater and in Czech classics over a savory Pilsner Urquell in various DC pubs as part of the Film and Beer series.

As part of the festival’s special events, the Motion Picture Association of America hosted a private reception and documentary screening on September 21 in honor of Miloš Forman’s 80th birthday, during which Czech Deputy Prime Minister and Minister of Foreign Affairs Karel Schwarzenberg gave tribute. Respect and admiration for the director’s work were further given on September 30 by over one thousand enthusiasts, who flooded the National Gallery of Art to watch his triumphant film Amadeus, followed by an unforgettable performance of Mozart´s Requiem by the Catholic University of America’s Symphony Orchestra and Chamber Choir.

The Smithsonian’s National Museum of American History and the National Museum of the American Indian partnered with the Czech Embassy on the final screening of the Mutual Inspirations Festival 2012 - Miloš Forman. On October 28, Forman’s One Flew Over the Cuckoo’s Nest lit up the Warner Brothers Theater. The event included a very special honor, a letter of greetings from the President of the United States of America expressing his congratulations on the festival and appreciation of Czech and American inspirations. The film, which reflects upon Forman’s experiences under the communist totalitarian system, was appropriately featured on the day the Czech people celebrate the establishment of their sovereign, democratic nation.

We hope that you will join us again next year during the Mutual Inspirations Festival 2013, as we commemorate the life and legacy of Václav Havel – citizen, artist, president.