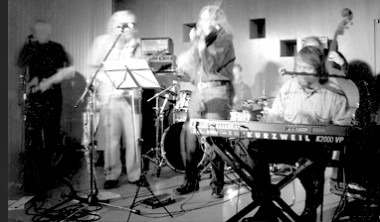 Fort Fringe - The Shop will present the documentary The Plastic People of the Universe at 12 noon, followed later in the evening by a concert of renowned jazz artists Rudy Linka (guitarist) and Christina Prindle (singer) in a program dedicated to Havel beginning at 8 pm. Please scroll down for a listing of the two events.

Documentary director Jana Chytilová's moving documentary The Plastic People of the Universe centers on a band that changed the course of history simply by performing the music that they loved. The documentary film traces different stages in the band's history that spans more than 30 years, with unique archival footage, photographs, musical excerpts, and interviews with the musicians and their friends, including Václav Havel and Lou Reed.

September 19, 8 pm
Jazz Duo: Rudy Linka and Christina Prindle
Program: "Love Story - jazz and spirituals that celebrate the complexity of love in music, dedicated to Václav Havel, on of the greatest Europeans of our age."

About the Artist:
Rudy Linka is a composer, jazz guitarist, band leader, and artistic director. Born in 1960 in Prague, Czech Republic, he started to play the violin at the age of five and switched to classical guitar nine years later. He moved to Sweden in 1980, where he studied at Stockholm Music Institute. In 1985, he was awarded the Jim Hall fellowship at Berklee College of Music in Boston. He later moved to New York to study at the New School and privately with Jim Hall, John Abercrombie, and John Scofield. Rudy has performed and/or recorded with such artist as Red Mitchell, Gil Goldstein, Bob Mintzer, Paul Motian and many others. He has released 15 albums (Enja, Timeless, Universal, Sony/BMG, Quinton), has been voted as one of the ten best jazz guitarists by readers of DownBeat magazine and performs around the world. He is the founder and artistic director of the international festival Bohemia Jazz Fest. For more information about Rudy Linka, please visit www.rudylinka.cz.