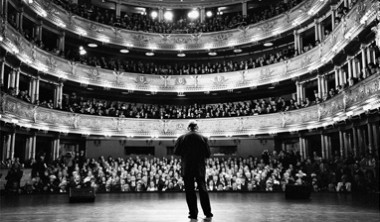 We regret to inform you that due to the government shutdown this event has been canceled.

The National Gallery of Art will screen the films Joseph Kilian and Who Is Václav Havel... on October 12 at 2 pm, followed by And the Beggar's Opera Again at 4 pm, in the East Building Auditorium as part of the film program entitled "The Play's the Thing:" Václav Havel, Art and Politics. Delve into the life of a man who went from being a dissident to president overnight.
Photo © Tomki Němec

The Play’s the Thing:  Václav Havel, Art and Politics
Václav Havel (1936-2011), the dissident and imprisoned dramatist who went on to become  world renowned statesman as first president of the Czech Republic, changed the course of twentieth-century history by mixing theater with politics and peacefully ending communism in his country. His plays, filled with metaphor and pointed innuendo, exposed the failings of the system, and Havel became a hero in an epic struggle. This program is based on the places and people that Havel knew, from the influential Theatre on the Balustrade where his theatrical career began, to his friendships with filmmakers of the Czech New Wave, to his political ascendancy in Prague.

A man searches for an old acquaintance, Joseph Kilian, in Prague. On a whim, he enters a state-run cat rental place and leases a feline for a day. But when the search for Joseph Kilian proves futile and he attempts to drop off the cat, he finds that the rental store has completely vanished without a trace.

Who is Václav Havel... is a short propaganda film, produced for the communist regime in the 1970s, to disparage Havel, his plays, and his supposed wealth.

Through Sommerová's creatively intercut film, two productions of Václav Havel’s Beggar’s Opera reveal the political dynamics of the former Czechoslovakia before and after the Velvet Revolution in 1989. The dress rehearsal of the play’s world premiere in the village of H. Počernice in 1975, captures the tension and joy of the artists who conspired through theatre against the totalitarian regime. The production  is contrasted against the relaxed atmosphere of the dress rehearsal of the play performed in 1995 by the theatrical group Divadlo na tahu at Havel’s cottage in the village of Hrádeček. Informal dialogue with the artists, Havel, his wife Olga Havlová, incidentally her last time captured on film, offers an intimate view into the changing tides.

Admission is free. No reservations are required.