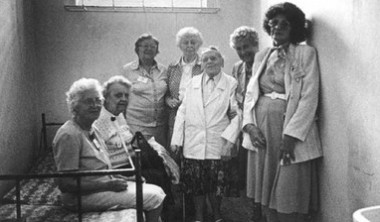 The Library of Congress will screen director Helena Třeštíková’s Sweet Century (Sladké století) in the Pickford Theater on October 25, at 12 noon. The film presents a portrait of several remarkable Czech women, who endured harsh imprisonment under a communist dictatorship, which Václav Havel stood against. Their stories of the horrors of communist prisons are intercut with old propaganda films and archival footage. The film won the award for best documentary at the Karlovy Vary International Film Festival in 1998.

About the Director:
Helena Třeštíková studied documentary filmmaking at the Prague Film Academy, FAMU. Since 1974, she has worked as a professional filmmaker, shooting almost fifty documentary films of various lengths on themes of interpersonal relationships and social problems. In the course of time, she specialized in the longitudinal approach, following people’s life stories on long-term basis. For a period of six years, her first series of time-lapse films followed the everyday lives of several young married couples from the moment of their wedding. For her film René (2008), she was awarded by the European Film Academy (EFA) the 2008 Prix Arte for Best Documentary Film.