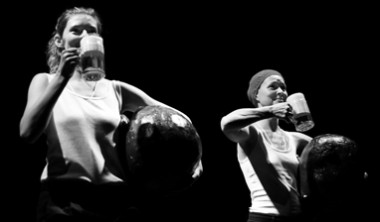 The Ambassador Theater presents the Spitfire Company's preview of Antiwords, directed by  Petr Boháč and performed by prominent Czech physical theater actresses Miřenka Čechová and Jindřiška Křivánková in the Mead Theatre Lab at Flashpoint on September 21, at 8 pm. The new work draws inspiration from the works of Václav Havel, especially his play Audience and its legendary film adaptation, in which the role of the brewer was played by Landovský with his ability to drink nine pints of beer while in character. Aside from the two actors, major roles are played by oversized heads authored by sculptor Paulina Skavova, and by Sivan Eldar's music composed specifically for this performance. Under communism, Havel’s plays were banned in theaters; therefore, his work was performed in the living rooms, barns, pubs, and other unexpected places, which was often called “apartment theater.” In the intimate space of Flashpoint, enjoy this very special “apartment style” theater preview.
Photo courtesy of Michal Hančovský

The opening performance will be complemented by a special selection of photographs by Oldřich Škácha, a close friend and photographer of Václav Havel. The photographs give an inside look into Havel’s dissident life.

At the opening show on September 21, savor a complimentary Pilsner Urquell, a favorite beer of Václav Havel, who spent some time working in a brewery during his dissident years, which served as inspiration for his own play "Audience."