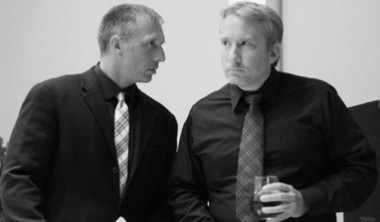 The Ambassador Theater will present Protest by Václav Havel and directed by Gail Humphries Mardirosian in the Mead Theatre Lab at Flashpoint from November 20-December 15, with a preview performance on November 19. In the play, Vaněk meets a friend upon returning from prison and gets involved in a campaign against the government calling for changes in the country. In this unique interpretation, the two male characters of Staněk and Vaněk have counter egos – characters echoed in two females, emphasizing the universality of the characters.
Photo courtesy of Anthony Brenneman

About the Performance:
In Protest, we meet a dissident on  return home from prison and a person deeply involved in a campaign to protest against the government by getting people to sign a petition calling for a change in the political system. One character is the protesting artist who suffered for his beliefs, the other a compromising and compromised playwright.

In this unique interpretation,  the two male characters of Stanek and Vanek will have counter egos—characters echoed in two  females, emphasizing the universality of the characters.

The play was written in the 1970's by acclaimed human rights activist and the first president of the Czech Republic, Václav Havel, and is an indictment of individuals who refuse to protest corrupt political systems and collude for their own personal advantage. It is also an investigation of human behavior and an exploration of artistic prowess exerted through circumstances of  personal adversity.

Havel challenges us in this play with pertinent questions:  What is the connection between the arts and social responsibility/citizenry?  What choices do we make as individuals when faced with circumstances of extreme volatility—what would we do if we had to make a choice between survival, compromise or revolution?

How would you act in the midst of these extreme choices?