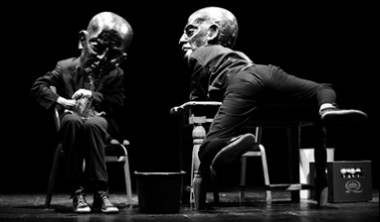 Fort Fringe - The Shop will present the documentary Citizen Havel Is Rolling Barrels (Občan Havel přikuluje) at 12 noon, followed later in the evening by a theatrical demonstration of Antiwords. Please scroll down for a listing of the two events.

September 26, 12 noon
Citizen Havel Is Rolling Barrels (Občan Havel přikuluje)
In 1974, the then banned playwright Václav Havel found a job as a brewery hand so that he would not be accused of social parasitism. He ended up rolling barrels and filtering beer for nearly a year even though he drove a Mercedes to work. His new experiences, described in the film by Arnošt Šerkézy, his boxer buddy from the lager cellar, started him on a new way of writing. He dashed off his first autobiographical play Audience in a single night. The film relates stories of the genesis, the productions and the cultural reverberations of Havel’s influential one-act. (Jan Novák, 2009, 72 minutes, in Czech with English subtitles)

Fort Fringe - The Shop features acclaimed Czech physical theater actress and director Miřenka Čechová in a theatrical demonstration of her original performance Antiwords inspired by Václav Havel’s Audience. During her demonstration, she will decode the theatrical language she is employing, present sequences of her work with commentary, as well as perform a major part of the theatrical work Antiwords. Enjoy an evening with the director as she shares her experience and insight into the nuances of physical theater.

The performances will be complemented by a select showcase of photographs by Jan Kašpar, a family friend of Havel. The photographs reveal Olga Havlová’s birthday celebrated every summer through theme parties and theatrical performances at Havel’s cottage in Hrádeček. The photographs were taken from 1975–2011 and capture most likely the last photograph of Havel at his cottage.

At the theatrical demonstration, enjoy a complimentary Pilsner Urquell beer, one of the finest beers from the Czech Republic. Working in a brewery, Havel found inspiration for his play “Audience,” which served as a way to release his own insight into the tumultuous circumstances under the communist regime.

For additional information about events taking place at Fort Fringe as part of the festival, please click here.