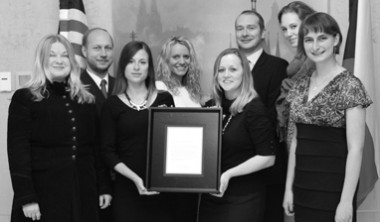 Marking this year’s festival in honor of former Czech President Václav Havel, U.S. President Barack Obama sent a celebratory letter reiterating the importance of the enriching ties between Czech and American cultures as well as the extraordinary example that Havel was for both nations. In the letter he said, “With unwavering courage and immense conviction, Havel not only inspired Czech and Americans, but also brought hope to millions of people across the world who yearned for freedom, democracy, and human rights.”

Over the last four years, the festival has featured Czech personalities that have made an impact on Czech and American relations such as the first President of Czechoslovakia Tomáš Garrigue Masaryk, composer Antonín Dvořák, and Oscar-winning film director Miloš Forman, and most recently former Czech President Václav Havel.

The culmination of the 2013 festival was held on October 2, at Georgetown University with the dedication of Václav Havel’s Place in the Alumni Square. Over 500 people attended the event commemorating Havel with a special panel discussion featuring Charles University Professor Tomáš Halík, People in Need Executive Director Šimon Pánek, and former U.S. Secretary Madeleine Albright. The former First Lady of the Czech Republic, Dagmar Havlová, cut the ribbon opening the memorial which consisted of the Czech national tree and a table with two chairs beautifully designed by Havel’s court architect Bořek Šípek. Singer-songwriter Suzanne Vega performed her new original work Horizon, dedicated to Havel. The establishment of the memorial at Georgetown University is a tribute to Havel’s legacy and serves as a living memorial for future generations.

The festival included over thirty events held throughout Washington, DC, and incorporated a variety of genres and exceptional talent. Catholic University Professor Joseph Santo composed and presented the world premiere of Life in Truth, a moving tribute to the late president. The Cathedral Choral Society, under the direction of J. Reilly Lewis, and the U.S. Army Concert Band, conducted by Colonel Thomas Palmatier, highlighted the work of Czech composer in the memorable concert The Power of the Human Spirit. Three theatrical directors, including Oscar-winning director Jiří Menzel, spoke about their approach to directing the work of Havel to a full house at the Czech Embassy. American actors teamed together with Czech director Miřenka Čechová to showcase an original rendition of Havel’s Unveiling at the Atlas Performing Arts Center. Documentary filmmaker Petr Jančárek featured his films at the West End Cinema and the Avalon Theater. These are only a few of the programs bringing together gifted individuals and organizations.

The Mutual Inspirations Festival in the last four years has spread its wings to over 25,000 people in Washington, DC, and the United States, bringing engaging programs to the public and garnering bonds with over 40 institutions. The festival has become a tradition in the heart of the American capital, generating new ideas, bringing together artists, communities, and further instilling the value and importance of the arts in America, the Czech Republic, and beyond.

Please stay posted as we get ready for 2014 and honor Franz Kafka – regarded as one of the most influential authors of the twentieth century.