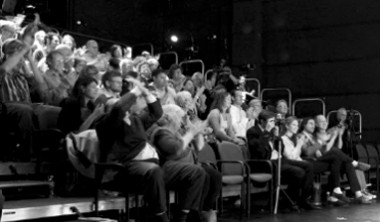 This phrase punctuated the otherwise wordless one-act play Antiwords, and it left me thirsty. Antiwords, brought to the D.C. area as part of the Czech Embassy’s Mutual Inspirations Festival honoring Václav Havel, is a masterful adaptation of Havel’s legendary play Audience. Based on Havel’s experience of being forced to work in a brewery and under constant harassment from the communist regime, Audience is part of Havel’s Vaněk Trilogy.

Antiwords' Director Miřenka Čechová uses oversized heads, dance, and body language to craftily evoke reactions ranging from laughter to a sense of loneliness and futility. The oversized heads come off however, when it’s time for another beer – keeping us rooted in the reality in which the performance is taking place. In the original, actors drank non-alcoholic beer to cope with the considerable consumption of beer the performance demands. Čechová, however, preferred to make things more realistic, adding the consumption of nine beers in the course of a one-hour play to the demands of the two-person cast. (Not to mention adding a great promotion opportunity for homeland beer, Pilsner Urquell.) Oh, and did I mention that the cast, originally two male actors, instead featured two wispy female actresses? I was astounded alone at their ability to stay in character and captivate, not to mention their impressive consumption.

As I pondered which beer I’d be ordering at intermission I also wondered what exactly I was supposed to be feeling as I watched. I was certainly experiencing the play, but, what was the intended message? I struggled to make sense of what was intended. That’s the point, noted Čechová. The hope is that each audience member will have their own interpretation, draw from their own experiences, create their own meaning for what they are seeing.

This is after all, how Havel approached all things during his life.

After intermission (and a beer), the project continued with Unveiling and a theme that was a bit easier for this American to cling to. The play places protagonist Ferninad Vaněk, the alter-ego of Havel and star of the trilogy, in the apartment of two friends, Vera and Michael. Both Michael and Vera describe their get-together with Vaněk as the “unveiling” of their newly decorated apartment, but what unfolds over the course of the play is truly an unveiling of character, social relationships, and personality. What starts out as a simple social gathering unravels into points of criticism, painfully awkward moments of desperation, and want for acceptance, all illustrated through common social interaction between friends. I actually found myself feeling uncomfortably tense during moments of scrutiny of Vaněk’s marriage, career, and family life by the couple – a dynamic all too close to home for this thirty-something single professional. The intense zombie-like state induced by the snowy static of a television when tensions peak was also a wild and uncomfortable reminder of the way the Michaels and Veras of the world find peace. Unveiling, it seems, unveiled a little in me, as well.

I assumed, that like Antiwords, Unveiling had also been interpreted for the Mutual Inspirations Festival. It resounded with me so strongly, I thought it must have been catered to an American audience. Susan Gailbraith, President of the Alliance for New Music Theater, and Vera herself in the play, corrected me. “We actually only changed one or two lines from the entire scrip to omit references to communism,” Gailbraith explained. “Our goal was to create social and political debate through theater.” (Mission accomplished!) Removing the immediate political context of the Havel’s originalUnveiling was meant to allow audience members to explore how they might be connected to Havel. A long-time student of communism in Russia and the post-Soviet space, I’d never given thought to this aspect of relation. “We all know Michaels and Veras,” Gailbraith said with a knowing smile. “How does it (Unveiling) apply to your everyday life?”

Thinking about this, makes me think I’ll have another beer.

You can catch more performances of Antiwords and others of Havel’s works throughout the festival. If you see me there, I’d love to share some conversation and a beer.