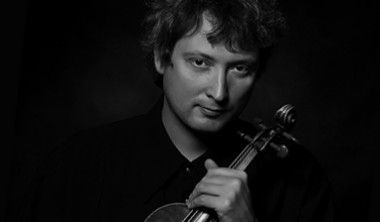 On October 26, at 6:30 pm, violin virtuoso Alexander Shonert will perform the concert Overlapping Worlds at the National Gallery of Art in an intimate program dedicated to Franz Kafka. The concert features Czech and Jewish music that has resonated throughout Prague for centuries. Shonert’s brilliant virtuosity, the intensity of his feeling and the striking originality of his interpretative style, combined with his enchanting improvisations, has won him the critics' acclaim. Experience an enchanting afternoon at the Gallery embracing music that has touched the soul for centuries.

ABOUT THE ARTIST:
Alexander Shonert was born in 1972 in Siberia. However, his roots are Central European. His grandfather escaped the Nazis to Moscow, only to be sent to a Gulag concentration camp by Russian communists. Shonert’s parents are pianists and the question thus was not whether to play but what instrument to play. Since the age of six, Shonert has been fascinated by the violin and attended musical schools in Irkutsk and Novosibirsk. In 2008, Shonert moved to Prague, Czech Republic. Alexander Shonert’s specialty is interpretation of Jewish music and improvisation. Violin maestro Josef Suk, the great-grandson of Antonín Dvořák, remarked that “He [Shonert] is a brilliant artist, gifted by God.”

For more information about the artist, please visit
http://shonert.com/en/.

Concerts at the National Gallery are open to the public, free of charge. Admittance is on a first-come, first-seated basis, beginning 30 minutes before each concert. The entrance at 6th Street and Constitution Avenue NW remains open on Sunday until 6:30 pm. Families with small children may be asked to sit in designated areas. Please note that late entry or reentry of the West Building after 6:30 pm. is not permitted. For further information, call (202) 842-6941.
Photo credit: www.shonert.com