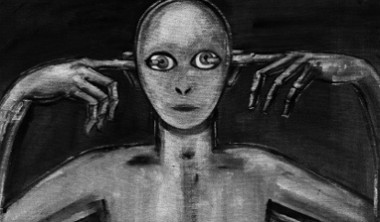 On November 8, the Katzen Arts Center at American University, in collaboration with the Shoah Memorial Prague, will open the exhibition Eugenic Minds comprised of a documentary by Pavel Štingl, animations and paintings by Xenie Hoffmeisterová, and literary artwork by Patrik Ouředník. The exhibition offers a timeless meditation upon the abuse of the human pinnacles of science and education. Secondly, it addresses the question of academic careerism, which under totalitarian regimes reaches self-destructive proportions. The moving documentary, animations, and artwork delve into the definition of science and the situations when learning becomes a pseudo-science. The exhibition also uses historical sources regarding the dominant theme of the first half of the 20th century, centered on the Nazi era. Nazism here is not only an inexhaustible fount of drama from the time when the value of human being or not-being was seriously deformed, but it also provides examples of propaganda capable of visualizing a subject in an unprecedented manner. The project is coordinated by the Shoah Memorial Prague that is preparing the launch of the Holocaust Memorial in the Czech Republic. The exhibition Eugenic Minds is the first presentation of the young NGO abroad. View this unforgettable exhibition that brings new perspectives on humanity.

ABOUT THE DOCUMENTARY: EUGENIC MINDS
The authors of Eugenic Minds walk us through the history of eugenics – the temptation to take the fate of humankind out of the hands of God and, literally, shape the future. We learn that the desire to discover and, more importantly, to control the dynamics of human evolution is as old as thoughts on what is beautiful, preferable, more desirable. The documentary demonstrates that the very ambition of the Nazis to control the world was in some sense eugenic. The Nazis believed that they possessed the legitimacy to determine who has the right to live and who must die. Furthermore, they wrapped their horrific efforts in scientific terminology, obfuscating the fact that science was mistreated in their hands―exploited for ideological reasons.

In his novel Metamorphosis, Franz Kafka narrates a story of a young man by the name of Gregor Samsa who once wakes up transformed into an insect. His family has little understanding for his new condition and instead of trying to help him overcome his difficulties, his father, mother and daughter fear him. In fact, they are disgusted by his appearance and soon perceive him as a burden that should be gotten rid of. When the leading character finally dies of an injury inflicted by his own father, the family looks forward to its bright future, full of confidence in its only remaining daughter. The fact that Gregor Samsa used to have a promising future, and that he, too, was valued by his family as long as he managed to earn a decent pay wraps the end of Kafka’s story in bitter irony. Perhaps in a world where the line between love and disgust is so thin, no one, not even the now cherished daughter, enjoys security. Said with John Donn, "never send to know for whom the bell tolls; it tolls for thee.

There is no doubt that Kafka’s Metamorphosis is first and foremost an appeal for love but it is also an illustration of the fact that anyone can find himself in a situation where he must rely on others’ compassion and understanding. And it is precisely for this reason why any eugenic attempt to define superior people can easily turn against its originators. As the documentary Eugenic Minds clearly illustrates, the center of eugenics is the tenet that certain human characteristics are beautiful while others are not. As much as the practitioners of eugenics tried to justify their choices in scientific terms, the very process of defining “the chosen people” remains political by definition. What is the solution to this conundrum? Kafka seems to suggest accepting love, one that is not conditioned on external appearance. The fact that the heyday of eugenics was about to come at the time of Kafka’s writing remains a paradox of history.