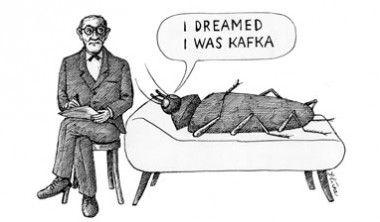 On September 3, at 6 pm, the Embassy of the Czech Republic will launch the Mutual Inspirations Festival 2014–Franz Kafka with a special exhibition KAFKA & CO. by Czech cartoonist Jiří Slíva. The exhibition features humorous drawings, lithographs, and etchings inspired by Kafka and others. Slíva has been featured in over 150 publications including The Wall Street Journal and The New York Times. His work concentrates mainly on cartoon and illustration. Slíva is one of the believers that “Kafka had fun for us,” exemplified through Kafka’s realism, humor, and irony. Delve into the humor of Kafka and this award-winning artist at the Embassy of the Czech Republic.

“I would like to ease slightly the long-term dark conception of Franz Kafka as (or mainly as) the messenger of desperation, futility, alienation…” ~ Jiří Slíva

A reception with light refreshments will follow the opening.

RSVP by September 1, 2014
www.eventbrite.com/e/festival-launch-and-exhibition-opening-kafka-co-by-jiri-sliva-sept-3-tickets-12431437765
Please cut and paste the link into the web browser if it does not work directly.

On View:
The exhibition will be on view from September 3–October 31.
Please email czech_events@yahoo.com to schedule an appointment to see the exhibition.

About the Artist:
Jiří Slíva was born in Pilsen, Czech Republic in July 4, 1947, and currently resides in Prague. After completing his studies in economics, he spent eight years working as a teacher. Since 1979, he has worked as a freelance cartoonist, illustrator and graphic artist. Slíva’s first drawing was published in 1972 in the publication Mladá fronta. He has published over 15 of his own books of cartoons in Germany, Switzerland, France, the United States, and the Czech Republic. Furthermore, his drawings have appeared in more than 150 books and in many Czech and foreign newspapers and magazines such as The New York Times, The Los Angeles Times, The Wall Street Journal, Playboy, Die Welt, Die Zeit, to name a few. For his creativity and talent, he has won many awards at cartoon festivals and has had solo exhibitions in Marienbad, Bratislava, Zurich, Moscow, Budapest, Warsaw, Berlin, Brussels, Amsterdam, Rome, Havana, Milan, Paris, New York, Tel Aviv, among others. For additional information, please visit  www.cartoongallery.eu/englishversion/gallery/czech-republic/jiri-sliva/