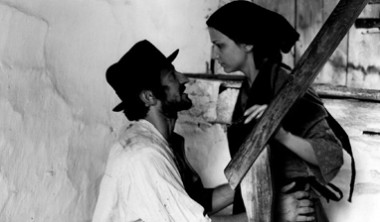 FILM: Golet in the Valley

On October 21, at 7 pm, Bistro Bohem will screen director Zeno Dostál’s Golet in the Valley (Golet v údolí). Using light humor, the film tells the story of a Jewish village in the most Eastern part of the former Czechoslovakia during the 1930s. The mystical word Golet is a place where Jews live together, outside of Israel, amongst of other ethnic groups. They live according to the old customs and rituals of their religion. When the peaceful atmosphere in their village is interrupted by the desecration of a ritual bath, the life of the village becomes out of balance. Through the film, the director and the cameraman bring to life the beauty of that time. An ensemble cast of leading stars from the Czech Republic reveal the kindness and humor of this refreshing picture. The film received a Czech Lion for cinematography and is comprised of the stories of the famous Czech writer Ivan Olbracht. Relax with a delicious Pilsner brew as you enjoy this film as part of the Film and Beer series. (DIR: Zeno Dostál, 1995, 90 min., Czech with English subtitles).