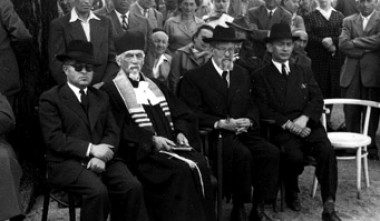 On September 17, at 6 pm, Martin Šmok will present the lecture Czech Jews under Communists, 1945-1989 at the Embassy of the Czech Republic. The mention of Jewish presence in Communist Czechoslovakia often evokes the image of a broken Rudolf Slánský, the former general secretary of the Communist Party, and his fellow defendants sentenced to death during the 1952 show trial. It was only after being tortured that Slánský was willing to accept on record that he was “of Jewish origin” - but the racist label invented by the Soviet architects of the show trial stuck and the Communist Slánský became a symbol of the Communist oppression of the Jews. Using unique documents, photographs and filmed interview excerpts, the lecture will explore some aspects of postwar history of the Jewish Community of Prague, as presented by the groundbreaking permanent exhibition installed in the Jubilee synagogue.

Please note: Programs at the Embassy of the Czech Republic are open to the public. Admittance is on a first-come, first-seated basis, beginning 30 minutes before each concert. Please note that guests arriving late to the performance will only be allowed entry into the concert during a break or intermission in the program.

Martin Šmok
Martin Šmok, currently Senior International Program Consultant at the USC Shoah Foundation, researched and scripted two documentary film trilogies: Among Blind Fools (1993-99), chronicling the WWII rescue work of the Bratislava Working Group, and Between a Star and a Crescent (1999-2003) about the role of Communist Czechoslovakia in the Middle East. His other credits include films Andre's Lives (1997) and Lost Neighbours (2003), and exhibitions: 105 (2005), using the 105th birthday of Stalin's favourite cartoonist as a pretext to present the power of visual propaganda, Hagibor – the Place, the People, and their Fate (2008), documenting the twisted history of a sporting field turned into a Nazi concentration camp and, subsequently, into an internment camp for ethnic Germans, Jewish Community of Prague since 1945 until the present, and Traces of Jewish presence in Vinohrady (2013). Šmok's comprehensive biography of Charles Jordan, one of the leaders of American Jewish Joint Distribution Committee, is slated for publication in 2016.