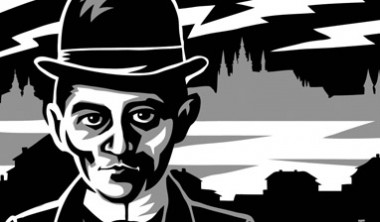 On October 30, at 6 pm, Czech illustrator and musician Jaromír Švejdík, popularly known as Jaromír 99, will give a lecture on Kafka and comics at the Embassy of the Czech Republic. In 2012, Jaromír accepted an offer from the British publishing company SelfMadeHero, to make Franz Kafka’s novel The Castle into a comic. Publishersweekly.com described the work as a “powerful interpretation of Kafka’s timeless themes.” For this adaptation, he and co-creator David Zane Mairowitz received a nomination from San Diego’s Will Eisner Awards 2014, for Best Adaptation from Another Medium. Savor an evening with the talented artist as he brings Kafka's work to life.

Please note that the lecture will be in Czech and translated into English.

Admission is free. | Light refreshments will be served.

Additional information:
Listen to Jaromír 99 talk about his comics:
www.youtube.com/watch?v=BEq0VTaRPCQ

More about the Artist:
Jaromír Švejdík (a.k.a. Jaromír 99), is a Czech singer, songwriter, guitarist and artist. As a graphic artist, he co-created with Jaroslav Rudiš the comic Alois Nebel, which was made into an animated feature and selected as the Czech entry for the Best Foreign Language Film for the 2011 Academy Awards. The film was also named the Best Animated Feature at the 2012 European Film Awards. Additionally, he composed the soundtrack for the film. Previously, Jaromír created the comic Bomber and collaborated with his band Jaromír 99 & The Bomber on the soundtrack. He was awarded the Muriel Prize for his first solo comic strip “Bomber.” He has also worked as set designer and storyboard artist for films such as Samotáři, Jedna ruka netleská, and Grandhotel.

About The Castle:
The protagonist, known as K., struggles to break through unreasonable bureaucracy of the Castle and its village. He looks for acceptance that he may never find. Kafka was writing this final novel in 1922, when his tuberculosis was already in an advanced state. For that reason he never finished the novel. However, he suggested it would end with K. dying of exhaustion and the Castle notifying him he had finally been accepted. The Castle is considered to be the best, yet unfinished, novel Kafka has ever written.