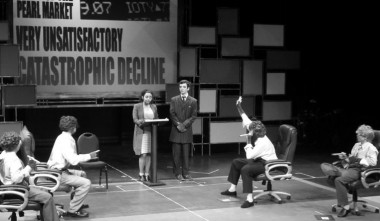 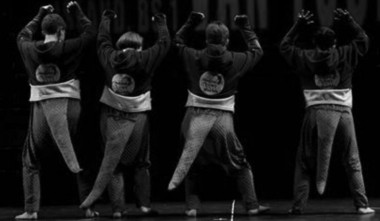 Czech Television went behind the scenes to interview the cast of War with the Newts at Georgetown University. On November 12, Georgetown presented the world premiere of War with the Newts, adapted by Professor Natsu Onoda Power and based on Karel Čapek's 1936 novel. Professor Maya Roth called the piece an "exhilirating, unsettling, and entertaining work." Please check out the video. Once you go to the link, be sure to scroll down to view the embedded video, with remarks from students and professors at Georgetown. 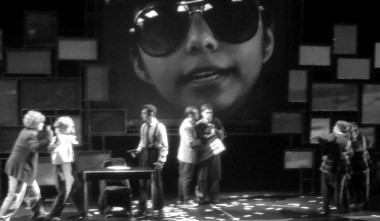 Georgetown student newspaper The Hoya reviewed War with the Newts directed by Natsu Onoda Power calling it “an expert adaptation and a modern perspective..feels unexpectedly relatable and relevant to today’s global issues.” Read the full article by clicking here. 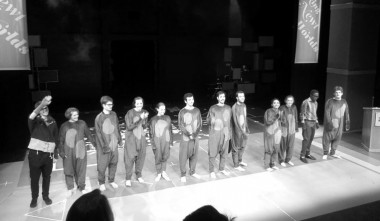 Powerful Adaptation - War with the Newts

Powerful, memorable, intense, humorous yet dark—Georgetown University students, under the direction of Professor Natsu Onoda Power, brought the audience to their feet for the world premiere adaption of War with the Newts on November 12, 2015, in the Gonda Theater.  Based on the 1936 novel by Czech author Karel Čapek, the science fiction work centers on the discovery of an intelligent breed of newts who are initially exploited than rebel, leading to a global war. Georgetown adapted portions of the novel into a script noting: “all actors are played by newts.” Director Natsu Onoda Power cleverly adapted the novel for the Washington-based audience, incorporating “newtisms” such as the Washingnewton Post, NPR – Newts Public Radio, as well as an impressive use of props and media to set the scene.  The premiere included a cameo by Miss Piggy and Kermit the Frog. The humor did not underscore the dark undertones from our nation’s past and present– slavery, persecution, discrimination, nazism, and war. In today’s world, the subject matter seems all too familiar. A full theater of students, professors, and the Washington-based community roared with applause and a standing ovation at the end of the show. Czech Ambassador Petr Gandalovič praised the performance saying that it has great potential beyond even the realm of the university that should be pursued. The show runs until November 21! Check out pictures from the premiere. 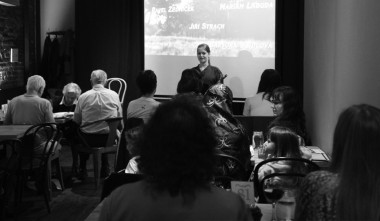 Beloved Classic Screens at the Bistro

Bistro Bohem screened Ruffiano and Sweeteeth (Lotrando a Zubejda), based on the classic Czech fairy tale by Karel Čapek, on October 20, 2015. In this tale filled with merry songs and wit, a notorious thief sends his only son Ruffiano to be educated by monks. On his deathbed, he requests that Ruffiano carry on the family “trade” of looting. However, Ruffiano’s pure heart finds no pleasure in such pursuits. He meets a woodsman and a band of foreigners that lead him down a path to the beautiful Sultan’s daughter, Sweeteeth, who has a mysterious illness. Can he cure her before it's too late? Embassy intern Kristýna Bartošová opened the event talking about some of the beautiful places featured in the film and the Czech humor imbedded into the script by writer Zdeněk Svěrák. Guests enjoyed a delicious Pilsner while enjoying this beloved film. 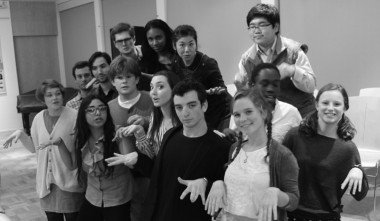 Who knew that newts could be so compelling? Georgetown University students presented a hilarious sneak peek of their new adaptation of War with the Newts, directed by Professor Natsu Onoda Power at the Embassy of the Czech Republic on October 8, 2015. The play draws from the novel of acclaimed Czech writer Karel Čapek focusing on an intelligent breed of newts that ultimately rebel after being exploited. Students presented select scenes of the mockumentary based on the classic, including a humorous song they created on the difference between a salamander and a newt. The dramatic presentation was followed by a Q&A with members of the audience. Director Natsu Onoda Power spoke a little about the underlining topics that she hopes to address in the production, such as labor conditions, exploitation and racial discrimination. The world premiere kicks off at Georgetown on November 12, with a two week run. Check out picts from the preview. For more information, please click here. 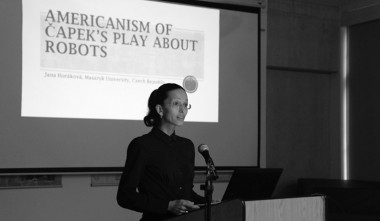 Finding the "Americanism" in Čapek's Work

Scholar Jana Horaková gave the lecture “Americanism of Čapek's Play about Robots” at the Embassy of the Czech Republic on October 6, 2015. An intimate audience gathered to hear her discuss the world premiere of Čapek's renowned play R.U.R. in Prague and the first stage production of the play in the U.S., utilizing a rich collection of historical photos and reviews. She followed the discussion with a short report on the literary and cultural context which the play entered into on the American continent. Her lecture paid particular attention to the position of Karel Čapek in science fiction, with examples of Isaac Asimov’s satirical references to Čapek’s play in his work.

The Great Adventure Lab facilitated a Lego Robotics Workshop to approximately 40 children on September 19, 2015, at the Czech Embassy. The children, ages 7-10, had a chance to participate in the free workshop through a robot drawing competition created by the Embassy of the Czech Republic. Each child received a certificate, a bag full of legos, and the opportunity to participate in the workshop. The event began with a discussion with Cultural Attache Robert Rehak who spoke about Karel Capek, known for his play R.U.R. (Rossum's Universal Robots) which made famous the word robot. The children presented their creations and then paired up to create lego robots - a goalie and a goal keeper. Great Adventure Lab provided teachers who guided the children through a computer program to make the robots. The activity proved to be popular with the children who grinned from ear to ear when they achieved the goal of making the lego robots come to life. Check out pictures from the workshop! 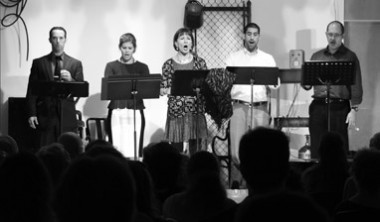 On September 10, 2015, the Embassy of Czech Republic welcomed the Alliance for New Music-Theatre to its stage to present the theatrical reading of R.U.R.: A Retro-Futuristic Musical, directed by Susan Galbraith with music by Maurice Saylor.  The production, based on Karel Čapek’s R.U.R. (Rossum's Universal Robots) written in 1920s, opened with a short improvisational sketch where the ensemble came into the room saying, "We've found survivors!" The talented five-member ensemble included John Boulanger (Alquist), Nick DePinto (Harry Domain), Ari Jacobson (Marius, Dr. Gall), Pam Bierly Jusino (Sulla, Emma), and Meghan McCall (Helena Glory). R.U.R.: A Retro-Futuristic Musical took the audience back to the future in the new musical adaptation and unveiling of Čapek’s 1920s play foreseeing the rise of artificial intelligence and its possible implications. About 120 people attended the performance followed by a debate over the meaning and contemporary context of Čapek´s play. 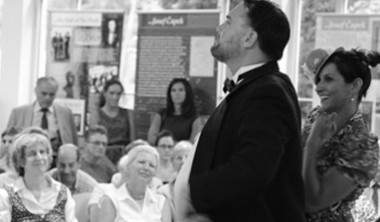 Ambassador Petr Gandalovič launched the Mutual Inspirations Festival 2015 – Karel Čapek, on September 3, 2015, in an evening of 1920s jazz music and dance, featuring Czech pianist Jana Otáhalová and the Fidgety Feet dance duo Lily Matini and Kevin Crandell. The evening paid tribute to celebrated author Karel Čapek, a true visionary of his time. Čapek’s lasting legacy includes such milestone works as Rossum’s Universal Robots (R.U.R.), The Absolute at Large, and War with the Newts. In the Ambassador’s opening remarks, he called Čapek a forerunner to such science fiction giants as George Orwell (Animal Farm) and Aldous Huxley (Brave New World). Over 150 people attended the event, with Cultural Attaché Robert Řehák presenting an overview of Karel Čapek’s life and work, followed by a short introduction into the highlights of the festival. He also offered a special surprise, revealing a series of graphic illustrations by Karel’s brother, Josef, borrowed from private collections and on view to the public for the first time. 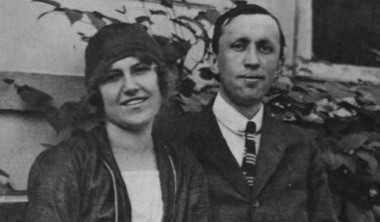 “There was no writer like him (Karel Čapek)...prophetic assurance mixed with  surrealistic  humor  and  hard-edged  social  satire:  a  unique  combination.” ~American playwright Arthur Miller

The Embassy of the Czech Republic announces the Mutual Inspirations Festival 2015 – Karel Čapek, celebrating the legacy of the world-renowned author through events in the nation’s capital from September 3–November 21, 2015. Enjoy theatrical performances, lectures, a special concert, and more! 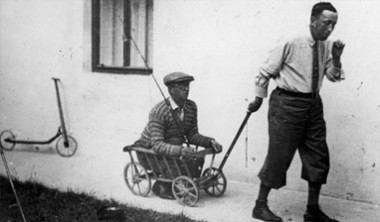 The Embassy of the Czech Republic announces the launch of the Mutual Inspirations Festival 2015 – Karel Čapek website www.mutualinspirations.org. This site features upcoming events, stories about Čapek’s life, US-Czech inspirational personalities, and more. Be sure to check the website periodically for updates of new events and information leading up to the festival this fall. 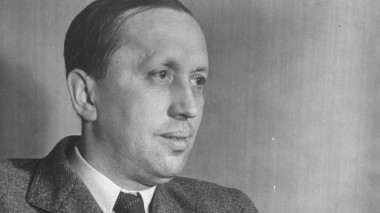 This site is currently under construction. The Embassy of the Czech Republic will launch the website of the Mutual Inspirations Festival 2015 on May 9, during the EU Open House. We look forward to sharing upcoming festival events with you, as well as the works of Karel Čapek.