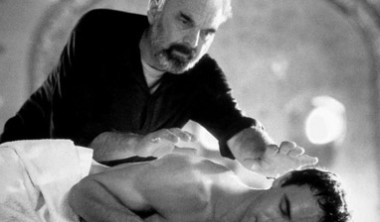 Bistro Bohem will screen director Jan Svěrák's film Accumulator 1 (Akumulátor 1) on September 15, at 7 pm. In this sci-fi drama, Olda (Petr Forman) suffers from a total lack of energy and falls into a coma. Natural healer Fišárek (Zdeněk Svěrák) tries to rejuvenate him. He learns that Olda has an “alter ego” inside the TV that utilizes the energy from the real Olda every time he tunes into the television. Can Olda resist watching TV and live a more fulfilling life in the real world, or will the television world, devoid of worries and full of joy and happiness, take over? Savor a delicious beer while watching this flick which was awarded the most popular film upon its release. (1994, 102 min., Czech with English subtitles)

RSVP required: bistrobohem@gmail.com | Admission is free!
Guests must arrive by 6:45 pm to keep their reservation.