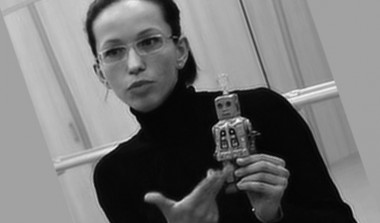 Scholar Jana Horaková will give the lecture Americanism of Čapek's Play about Robots at the Embassy of the Czech Republic on October 6, at 6 pm. The lecture reveals various aspects of the so-called “Americanism” of Čapek’s play  R.U.R. (Rossum’s Universal Robots), which premiered in Prague in January 1921. Reviewers of the world premiere  of the play wrote about the “Americanism” of the play because of its spectacular narrative and plot, particularly because of the universal and global issues contrasted to local and national topics of Czech playwrights of that time. In his play, Čapek unfolded universal issues of the artificial man, utopia, technological progress―topics not widely addressed in his home country. The praise could be seen as a critique by some who blamed him for wanting to write a play for export because of these very global topics. The play had its US debut one year later (1922). The attention that the theatre production gained in the States can be regarded as proof of its “Americanism.” Moreover, it was the success of the drama in an Anglo-Saxon cultural context that initiated the worldwide fame of the play and its author as a prominent representative of science-fiction. Unearth the American connection of Čapek's infamous classic.

The lecture will depart from the world premiere of R.U.R. in Prague and continue with a description of the first stage production of R.U.R. in the U.S., utilizing historical photos and reviews, followed by a short report on the literary and cultural context which the play entered into on the American continent. Special attention will be paid to the position of Karel Čapek in science fiction, with examples of Isaac Asimov’s satirical references to Čapek’s play in his work.

At the end of the lecture, some of the “universal” topics, that provided the play R.U.R. with the appeal of “Americanism,” will be highlighted, e. g. the secret of the creation of man (robots) and the ethical aspects of human creativity (the inventor or scientist as a hero). These issues not only didn’t lose their relevancy over time, but gained great urgency in the 21st century— the century of bioengineering.

Biography:
Jana Horaková studied theatre studies at Charles University in Prague and Masaryk University in Brno (MA, Ph.D.). She is an associate professor in aesthetics (Comenius University in Bratislava, 2011) and guarantor of the Theory of Interactive Media studies at the Faculty of Arts, Masaryk University, Brno, Czech Republic. She is interested in artistic activities in the intersection of art-science-technology with special attention to the media-performance and robotic art. She regularly publishes in Czech and foreign scientific journals, books and conference proceedings. With Jozef Kelemen, she won the best paper award at EMCSR 2004 (Vienna, Austria) in the history of science section. She has organized international symposiums in Media-Performance (2005, 2007, 2011). Together with Barbara Buescher (Leipzig, Germany), she is co-editor of the Czech-German book Imaginary Spaces (2008). Her first monograph Robot as Robot (Robot jako Robot) was published in 2010. Recently she has become interested in media archeology and software studies.