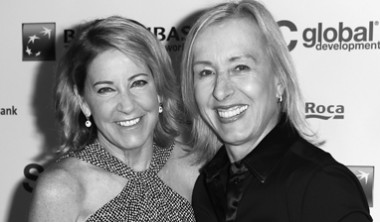 The Embassy of the Czech Republic features the documentary of ESPN Films 30 for 30: Unmatched, produced and directed by Lisa Lax and Nancy Stern Winters, on Thursday, September 15, 2016, at 6 pm. The documentary examines the fierce competition and everlasting friendship between the tennis legends Martina Navrátilová and Chris Evert. Their rivalry was perhaps the greatest in the history of sport. (2009, 51 min., in English)

Background
The Navratilova-Evert on court fierce rivalry for dominance in women's tennis is one of the greatest in any sport’s history. Between 1973 and 1988, the Grand Slam champs faced each other 80 times. Despite their epic rivalry, different playing styles, and contrary on court demeanor, they became very close friends and even doubles partners, winning at Wimbledon and the French Open together.

Embassy Policy:
No bags or suitcases allowed. Only small purses permitted but will be checked at the door. No coat check available. You must pass through security for entrance. RSVP confirmation and photo ID required. Even starts promptly. Doors close at 6:15 pm.