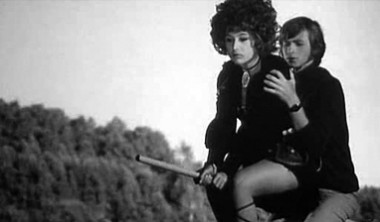 Classic Film: Girl on a Broomstick

Bistro Bohem will feature the Czech classic comedy The Girl on the Broomstick (Dívka na koštěti) directed by Václav Vorlíček on October 18, at 7 pm. In the film, teenage witch Saxana (Petra Černocká) escapes from her 300-year detention sentence in the supernatural realm to explore life among everyday people in the “real world.” While amongst humanity, a group of boys discover her powers and try to misuse them to achieve their objectives. Saxana meanwhile falls in love with a boy and discovers that she wants to become human. Will she find the ingredients to create a potion that will allow her to stay forever? Join us in a memorable evening of comedy. (Dir. Václav Vorlíček, 1971, 76 min., in Czech with English subtitles)

This coming of age film is about finding one’s self. The protagonist leaves home to experience a new world. The program is part of the Mutual Inspirations Festival 2016–Martina Navrátilová, honoring a woman who was the best tennis player of all time but also struggled to find her place in society.