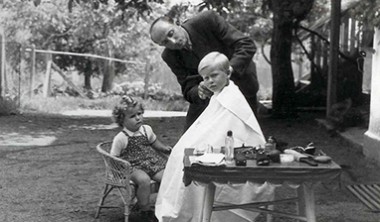 The European Division of the Library of Congress will screen director Andrea Sedláčková’s film Václav Havel – A Life in Freedom (Život podle Václava Havla) on October 20, at 12 noon, in the Pickford Theatre. The film explores the life of Václav Havel, taken from hundreds of hours of footage capturing various periods of Havel's life—family, childhood, his love, drama and political activities. Through the documentary, the director portrays Havel as intellectual rebel, lover of women and life, and admirer of rockers and dissidents. This "portrait" of Havel was made as the first-ever international co-production of Czech Television and Franco-German TV ARTE. The screening also commemorates the 80th birthday of former Czech President Václav Havel. (Dir. Andrea Sedláčková, 2014, 70 min., Czech with English subtitles)
After the fall of communism, Václav Havel spoke on February 2, 1990, to a joint session of the US Congress. Among those watching in the public gallery was Martina Navrátilová, who wiped tears from her eyes as Havel spoke. As part of the Mutual Inspirations Festival 2016, this film brings to life a leader who helped bring about democracy in Martina Navrátilová’s homeland.