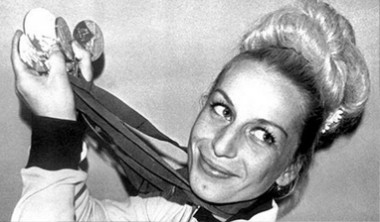 The Embassy of the Czech Republic will screen documentary director Olga Sommerová's Věra 68 on October 6, 2016, at 6 pm, The film reveals the incredible life story of Olympic champion Věra Čáslavská, voted the world's second most popular woman after Jackie Kennedy in 1968. The blonde bombshell gymnast shot to fame in 1964 after winning three gold medals at the Tokyo Olympics. She won four more gold medals during the games in Mexico City in 1968. That very year, the Soviets invaded Czechoslovakia and all eyes were on her as the Soviet anthem played while she was on the podium. A simple act of protest changed her life forever. Despite her enormous fame, she was reduced to cleaning houses. Her life story reflects the situation in Czech society, both during the communist regime and after 1989. Venture into  the life of an Olympic legend - Věra Čáslavská. (Dir. Olga Sommerová, 2012, 90 minutes, Czech with English subtitles)

This program is a part of the Mutual Inspirations Festival 2016 – Martina Navrátilová, honoring women athletes who lived under the Czechoslovak totalitarian regime while striving to reach the top in their respective sport.
Vera Caslavska passed away on August 30, 2016, at the age of 74.

RSVP required by by October 5 to www.vera68.eventbrite.com.

Embassy policy: No bags or suitcases allowed. Only small purses permitted but will be checked at the door. No coat check available. You must pass through security for entrance. RSVP confirmation and photo ID required. Doors close at 6:15 pm.