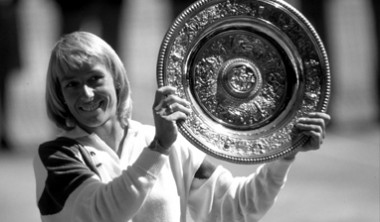 The Embassy of the Czech Republic announces the Mutual Inspirations Festival 2016 – Martina Navrátilová, honoring the best tennis player of all time, among men and women, in Washington, DC, from September 8–November 20, 2016.
The Mutual Inspirations Festival (MIF) is an annual initiative organized by the Embassy of the Czech Republic, concentrating on the mutual influence between Czech and American cultures and the enormous feats of the personalities who have led the way. In its previous six years, the festival has highlighted such personalities as President Tomáš Garrigue Masaryk (2010), composer Antonín Dvořák (2011), filmmaker Miloš Forman (2012), President Václav Havel (2013), writer Franz Kafka (2014), and author Karel Čapek (2015).
For its seventh year, the Mutual Inspirations Festival celebrates the Czech-American tennis legend, Martina Navrátilová, who took women’s tennis to another level and inspired the world with her unsurpassed records with 59 Grand Slam titles, including 9 Wimbledon singles championships. She remains to be the oldest winner of a Grand Slam title, male or female. Beyond her revered statistics, Martina is a proponent of numerous issues dear to her and her resolve to lead an earnest life. She has become an inspirational leader to rising stars, athletes, women, breast cancer patients, and minorities and is an outspoken advocate for human rights and healthy living. She provides commentary to the Tennis Channel and BBC at Wimbledon.
Martina “is the greatest singles, doubles and mixed doubles player who's ever lived,” according to former World No. 1 tennis player Billie Jean King. Martina’s ultimate women’s tennis rival and yet great friend Chris Evert admits that, “Her good day was better than me on my good day. It pains me to say that.”
Serving up events from September 8-November 20, 2016, the festival has the Washington area audience at an advantage, partnering with prestigious venues, such as The Washington Post, the Library of Congress, the National Gallery of Art, Georgetown University, American University Museum’s Katzen Arts Center, and the Avalon Theatre. The match point of this year’s celebrations is an exclusive sit-down talk with tennis legend Martina Navrátilová, interviewed by Washington Post reporter Petula Dvorak. Further highlights include a launch party, photo exhibition featuring award-winning artist Dita Pepe, original student poetry readings inspired by the works of late Czech President Václav Havel, and a theater production Protest by Alliance for New Music-Theatre. The festival will also incorporate several intriguing film screenings, such as documentaries on women leaders and a powerful nutritional assessment, Sugar Blues, on society’s consumption of sugar, as well as a women’s CrossFit hour and a walk against breast cancer.